N Seoul Tower, also commonly known as Namsan Tower, is an iconic Seoul landmark that provides bird’s-eye views of the city. It is both an observation and communication tower located at the top of Namsan Mountain in the geographical center of the city. N Seoul Tower is a very popular tourist spot and one of the top must-see attractions for any travel itinerary. It is also a popular date spot among locals. 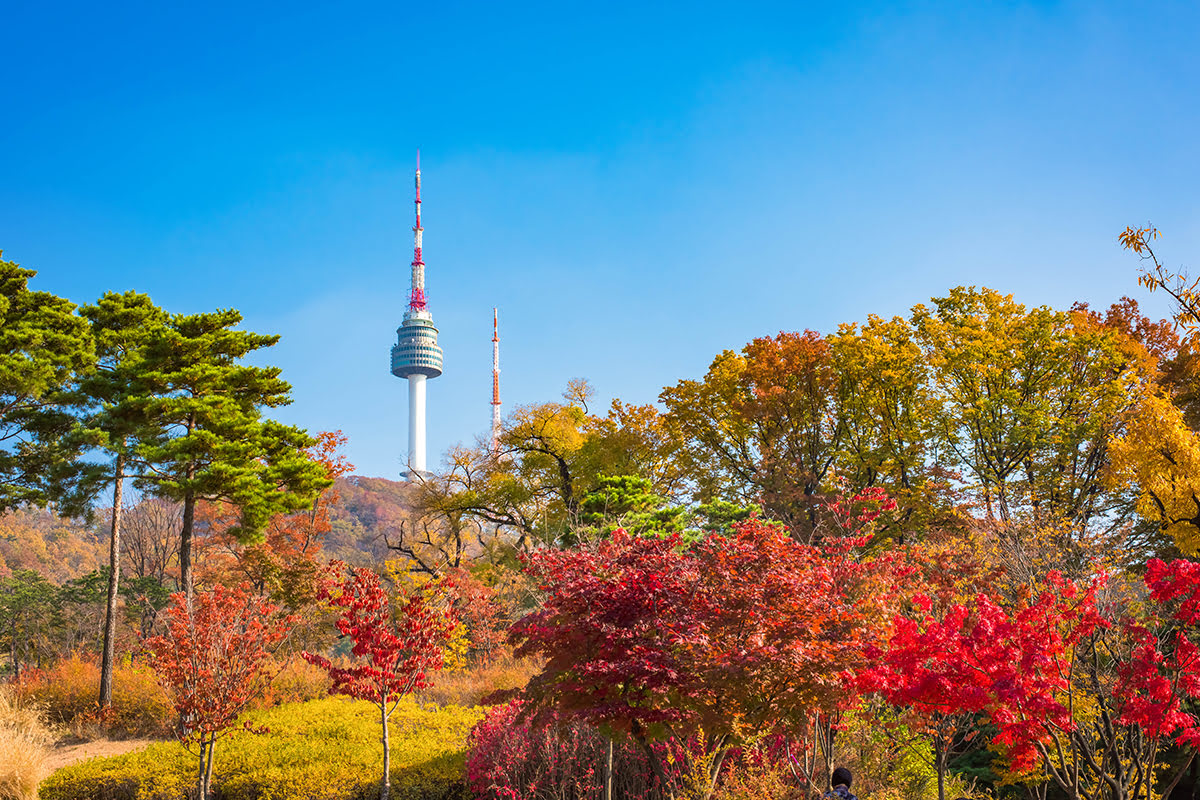 An overview of N SEOUL TOWER

Measuring 777 feet from its base to its top and sitting at the summit of the 797-foot-tall Namsan Mountain, N Seoul Tower rises approximately 1,574 feet above sea level. It is the highest point in Seoul, offering 360-degree views of the entire city. It was also the very first general radio wave tower in South Korea and continues to broadcast signals for media outlets such as SBS, MBC, KBS, and FM.

Construction on Namsan Tower began back in 1969 and the tower began broadcasting in 1971. It wasn’t until 1975 that the famous observatory was built and 1980 that the tower was opened to the public. By the year 2001, Namsan Tower had already received over 20 million visitors. In 2005, the tower’s name was changed to N Seoul Tower, with the “N” meant to stand for “Namsan,” “new,” and “nature.” A 2012 survey by the city found that N Seoul Tower was ranked as the number one attraction in Seoul among visitors. Today, the tower receives around 8.4 million visitors a year.

On top of being a landmark that you can visit, N Seoul Tower is beautiful to look at from afar, especially at night. Using the latest in LED technology, the tower is always lit up in various arrays of colors and patterns. The protected area around N Seoul Tower is also intended to display the harmony that can exist between nature and 21st-century, state-of-the-art construction. General car traffic is restricted in order to keep Namsan Mountain clean and green. 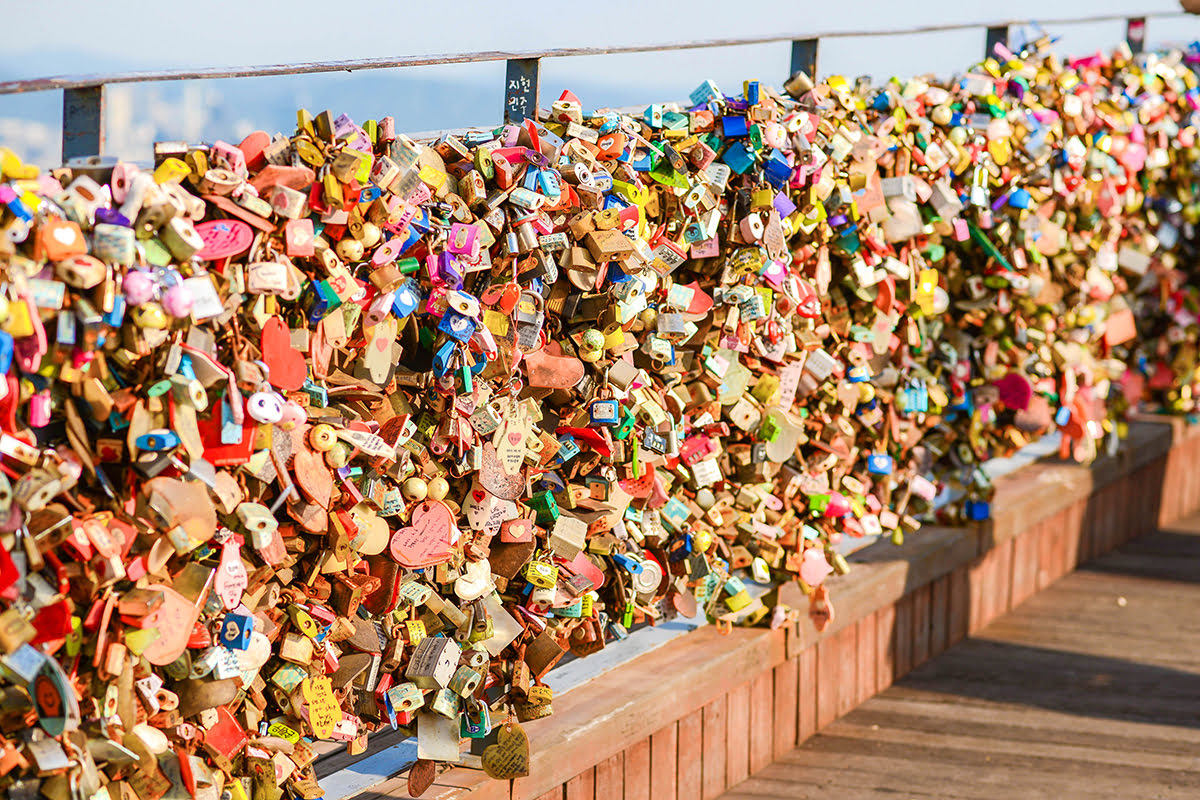 Main attractions and things to do at NAMSAN TOWER

N Seoul Tower is both a tourism and a cultural landmark. It’s a fantastic spot not only to take in views of the city but to learn a little bit about Seoul and South Korea while you are there. There are also a variety of dining options to suit any travel budget and you’ll find plenty to do around the tower if you’d like to continue sightseeing when you are finished. Here are some of the tower’s main attractions.

The main draw of N Seoul Tower is its observatory. Observe the city below from the height of the clouds by making your way up to the tower’s observation deck. The main observation deck on 3F features large, floor-to-ceiling windows the whole way around the tower, allowing you to experience the full 360-degree views. There is information on various points of interests that can be seen through the windows and plenty of comfy chairs around as well. One floor up from here, on 4F, you’ll find the digital observatory. This floor features high-powered telescopes and each window panel lets you know which major world city you are facing.

The Hanbok Culture Experience Center is located in the lobby of the N Seoul Tower plaza. It offers visitors a chance to take part in two traditional cultural experiences themed around the Joseon Dynasty. In the Hanbok Experience, guests get to dress up and accessorize in traditional attire and take pictures in the photo zones. In the Traditional Wedding Experience, guests dress up in wedding attire and have their photos taken by a professional photographer. The center is open from 11 a.m. to 10 p.m. Tickets cost 4,000 won for guests 14 years and older and 1,000 won for children under 13. Children under 7 years of age enjoy free admission. Note that the price of admission does not include Hanbok rental. It is also an extra charge to take part in the Hanbok Experience and the Traditional Wedding Experience.

Aside from a visit to the observation deck, one of the top activities for couples at N Seoul Tower is to hang a padlock from the fence around the plaza. Couples inscribe their names, initials, or even a short message onto the locks before attaching them to the fence as a symbol of their eternal love. The activity is commonly known as “love padlocks” and is popular among both locals and tourists. If you didn’t happen to bring your own padlock, then you can purchase one from the souvenir shop.

There are plenty of dining options available at N Seoul Tower if you work up an appetite while sightseeing. Sweet Bar is a great place to grab a drink and a sweet or salty snack such as popcorn. There is also a fantastic assortment of sit-down dining options. Take your pick from among the specialty Korean noodles at Cheiljemyunso, American-style burgers at N Burger, Italian cuisine at THE PLACE Dining, French fine dining at n.Grill, and Korean buffet dining at HANCOOK. For an incredible nighttime view of Seoul, don’t pass up the chance to enjoy a cocktail at the premium sky lounge N TERRACE. 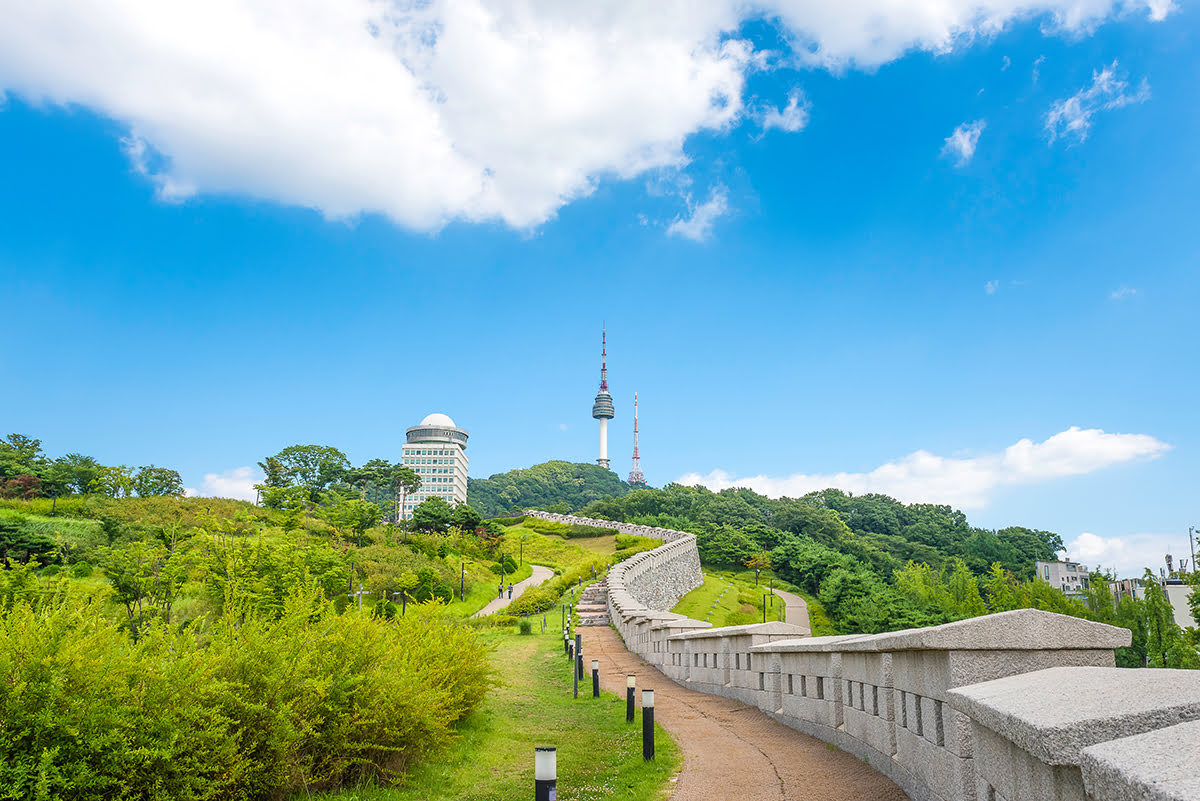 Namsan Park is a large public park spread across the slopes of Mount Namsan, surrounding N Seoul Tower. Sweeping views of Seoul are available from just about every area of the park, which also contains picnic spots and numerous hiking trails. The park is visited by over 20,000 people a day who want to experience nature in the heart of the sprawling city. It is open every single day and features numerous facilities, including a botanical garden, a library, a pond, a snack shop, and many sporting facilities as well. Namsan Park is a great place to explore before or after your visit to the tower. 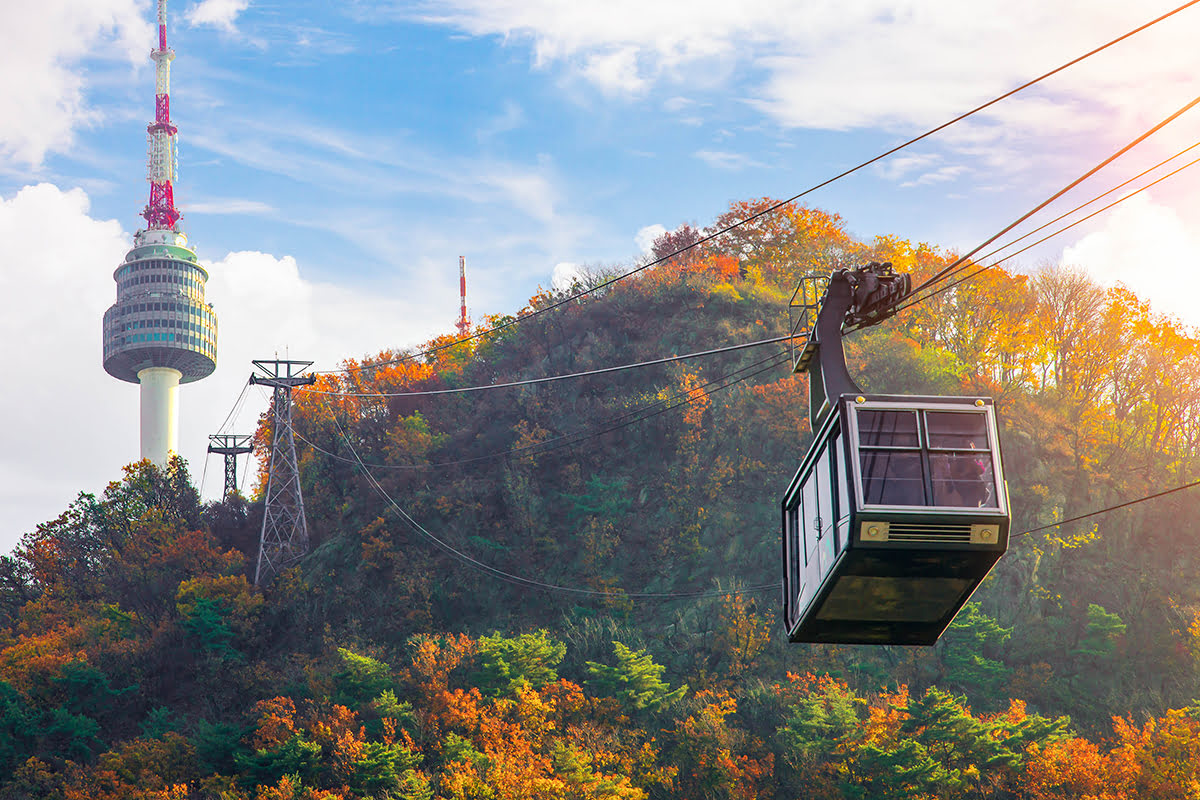 How to get to N SEOUL TOWER

There are a number of ways to get to N Seoul Tower depending on how you prefer to get around on your travels. While it is possible to walk up Namsan Mountain and reach the tower, the trails are steep and fairly difficult. The most recommended transportation options for tourists are the Namsan Cable Car, a shuttle bus, or a city tour bus.

The most unique and picturesque way to get up Namsan Mountain to N Seoul Tower is to take the Namsan Cable Car. The cable car takes you straight up Namsan Mountain, offering stunning views of the surrounding Namsan Park and of the city. To get to Namsan Cable Car, you need to take subway line 4 to Myeong-dong Station. Leave from exit 3 and follow the signs for Namsan Tunnel #3. After a 10- to 15-minute walk, you will reach Namsan Orumi, a slanted elevator that provides a free ride up to Namsan Cable Car.

There are three shuttle buses that can take you up to N Seoul Tower for 1,200 won in cash or for 1,100 won with a transportation card. They can each be reached by two different subway stations and arrive every 15 to 20 minutes.

The Seoul City Tour Bus provides shuttle tours to the most popular attractions in the city, with a choice of different courses for different attractions. The courses that will take you to N Seoul Tower are the Downtown Palace Namsan Course and the Night Course. Both depart from Donghwa Duty Free, which can be reached by taking subway line 5 to Gwanghwamun Station and leaving out of exit 6.